The quest for a Leanovation logo

The wonderful Laure and Ali from DigitalPark, who are busy on Leanovation’s website, are also working on a logo. We already had many discussions, mostly based on the meaning of LEAN and the legacy of this term. I see it in aligned with the graphical type of The Lean Startup from Eric Ries, Lean UX of Jeff Gothelf and Running Lean by Ash Maurya. I believe following the graphical style of these established LEAN tools will help me improve my visibility. Here are the 4 propositions based on this briefing. What do you think of them ? 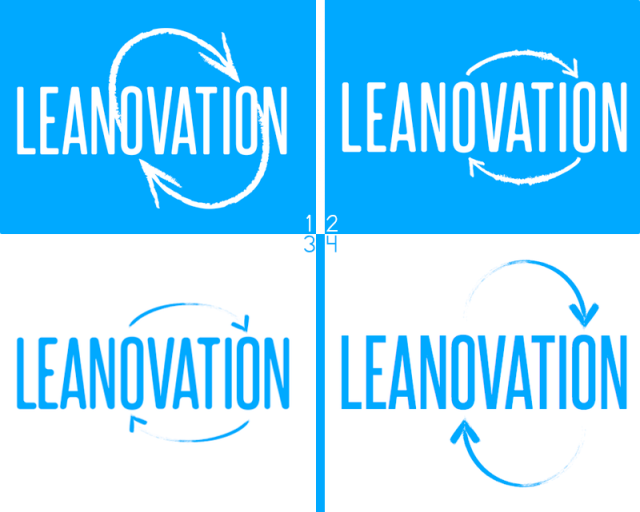 Additionally to a logo and a branding, I believe I need an icon, a small graphical element that will get Leanovation recognized easily. Think about an avatar for any website or social network out there… I really like the circle on the cover of The Lean Startup (look at the favicon of the website). But, as the Leanovation process looks different, I first focussed on the main arrows linking the 2 wheels. You can see it already in the logo (connecting the 2 O’s of the term Leanovation). Laure kindly isolated them to see how it looks on their own. Any comments on it ?

I really like the first one, probably because it doesn’t look too obvious, it has his own personality being drawn with a chalk and being slightly rotated. But since the beginning, I believe it can be the face of a small character. Which makes sense hearing first comments on the website graphic style being a bit cold and lacking fun. 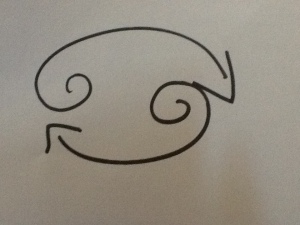 But last night, doing something totally unrelated, some inspiration came to me. I first doodled it in 2 pieces: the left one being the Thinking part of the process and the right one the Doing part of it (the one described in The Lean Startup). But the iterative part was missing… So the spiral came back to me (spirals and helix follow me for a long time already, especially since I heard this song from Tool) and I drew this. It actually makes perfect sense: it brings a Thinking/Doing complementarity (very under considered lately, most people from the Lean movement focussing on action and not on strategy), it brings something both unique and simple, it makes it even fun (Innovation turns your head, Leanovation makes it straight!). So I tested it on both Twitter and Facebook and the feedback was very interesting!

First of all, I got more interactions than any other post I published on any platform. And people were connecting to it in a very personal way, as well as expressing interpretations from popular culture (Astrology, Sex position 69, food…). This means that there’s a connection with people around me that is strong enough to create engagement. I’m very happy with that!

But now I would like YOUR advice on it! Thanks! =o)

[Update August 18th 2012 20:56]: Oops, I forgot the nice logo that Mike, my colleague at Immoweb, spontaneously made when I had shown him the ones from Laure and Ali. He pictured it in a round font with a more raw drawing for the arrows. Check it out!

3 Responses to The quest for a Leanovation logo