iPad is the new TV 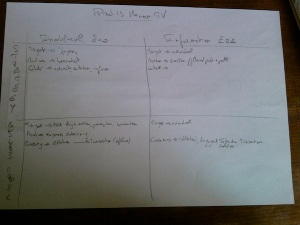 Considering the big shift from an industrial era towards an information era, as used several times already on this blog but best described here or here, it could be interesting to see what would be the ultimate experience for this new era. That’s the exercise I’ve tried to sketch these last 2 days, comparing the iPad (which I intuitively believe is the enabler of this new experience – at least for now) to the television, the main ecosystem of the industrial era in terms of media.
In order to fit the current state of my work, I’ve compared the 2 eras in 2 dimensions: Strategy and Business Model.

This morning, together with a sweet sunny breakfast at Café Belga, I went further, trying to fill the empty cells. Starting with W’s (What, Who, When, Where…). Being a bit stuck, I stepped back and considered the whole cultural paradigm (as described in Spiral Dynamics): Orange (driven by performance) versus Green (driven by system balance). It helped me, comparing dimensions as culture, economy, entertainment & media and advertising, to isolate patterns. Of course, this cannot be seen as an ultimate truth, but rather as a vision on how things were and will be arranged.
While industrial era  shaped media, entertainment and advertising to support this system, focussing on broadcasting a WHAT, information era is more focussed on making better connections, supporting the HOW. And if TV was the hero of the industrial era, we can imagine that the iPad should follow an evolution where it connects in harmony media, users and advertising. Media is not the only one to produce the WHAT (the content), it is the platform that connects 3 types of content: generated by users, produced by media(s) and created by advertisers.

This reflection is very fresh. Feel free to comment to make it move forward!

1 Response to iPad is the new TV